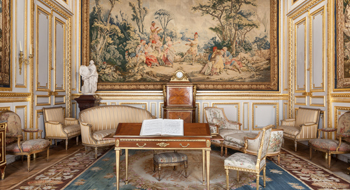 This room, known as the Tapestry Room, leads you into a series of more private apartments which Edouard André and his wife reserved for their personal and business affairs. This room is the antechamber preceding their study. Its main characteristic is that it was adapted to the dimensions of the wall hangings that decorate it,which Edouard owned before the mansion was built.
These three tapestries were part of a series called “Russian Games”, woven at the Beauvais manufactory from sketches by Jean-Baptiste Le Prince, a pupil of Boucher. They depict “The Dance”, “The Musician” and “The Fortune-Teller”.

The parquet is covered with a Savonnerie carpet, on which stands an easel displaying the only painted adornment in the room: a gouache by the Venetian painter Guardi. As for the furniture, it bears some prestigious stamps: Othon, Joseph, Riesener. 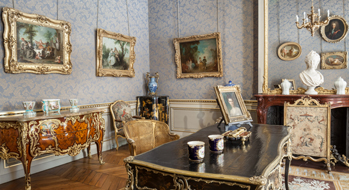 It was in this room that Edouard André and then Nélie Jacquemart organised their daily life and held their business meetings. Interestingly, this room is not laid out in the austere manner of a ministerial office, but has a more intimate décor made up of their favourite objects. On the walls we find a series of 18th century paintings: Fragonard, Lagrénée, Coypel, Pater, Greuze. The ceiling is decorated with a transposed fresco, the work of Tiepolo.

To furnish it, the Andrés brought together some equally prestigious items of furniture: stamped Chevenat chairs covered with tapestries by Aubusson ; Japanese lacquer writing desk decorated in gilt bronze attributed to B.V.R.B. ; Louis XV commode in rosewood with marquetry in violet wood attributed to the cabinetmaker Joseph Baumhauer and Louis XV desk, stamped by Jacques Dubois, the king’s favourite cabinetmaker. 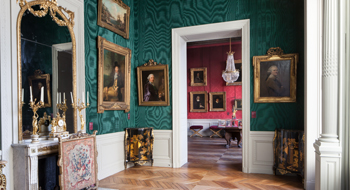 This boudoir, like the room next door, was initially intended to be part of Nélie Jacquemart’s private apartments: with her bathroom in this room and her bedroom in the next one. But a few years later, Nélie decided she wanted to be nearer to her husband, so she had a new room installed near to his. It was at this point that this room became a boudoir.

The Portrait of the Countess Skavronska painted by Elisabeth Vigée Lebrun recalls the taste of the royal court and the woman who was Marie-Antoinette’s chosen portraitist, while the Count Français of Nantes painted by David, evokes the strictness of imperial etiquette. The ceiling, by Tiepolo, presents Allegories of Justice and Peace. Furniture in the style of Louis XVI in gilt wood and paintings by old masters create a coherent ensemble of the Neo-Classical period. 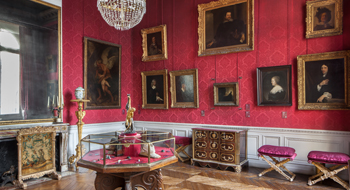 Nélie Jacquemart’s bedroom, which later became the library, this is the most secluded room in the mansion. The couple came here to consult sales catalogues and decide on their future purchases.

The room’s furniture is in the style of the Louis XVI epoch, and the Fontanges cabinet, given by the king to Mademoiselles de Fontanges, is its most astonishing jewel. On the walls, visitors discover a series of Flemish and Dutch paintings from the 17th century. In 1865, Edouard acquired the Portrait of Doctor Tholinx by Rembrandt. This was later joined by the famous little scene of Christ at Emmaus, also painted by Rembrandt. Around this truly priceless painting, portraits and landscapes bring together the prestigious names of Van Dyck, Frans Hals, Philippe de Champaigne and Ruysdaël. 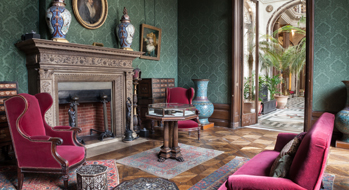 The Smoking Room is a room designed for after-dinner conversation between men in front of the fireplace. While Nélie took refuge in a small sitting room to tell her friends all about her latest discoveries in Italy, Edouard led the men here to discuss business or travels and to smoke in front of a good fire.

All the rage during the Second Empire, smoking rooms were generally decorated in an oriental style. This room follows this tradition, bringing together objects brought back from distant travels. Edouard André had the walls hung with imitation Cordoue leather in papier-mâché and decorated the ceiling with a painting depicting the Dispute of Minerva and Neptune over the founding of Athens, created by a disciple of Tintoretto. The fireplace was brought back from Venice.

As for the English portraits which decorate the room today, Nélie bought these during a long stay in England in 1895.