Our priority: our health

Following government announcements, access to the museum, the café and the bookshop requires the presentation of a green pass.

The health pass is accepted in digital or paper format.
For children aged 12 to 17, presentation of the green pass will only apply from 30 September.

Wearing a mask remains compulsory in the museum.

We thank you for your understanding,
The Jacquemart-André Team

To welcome you in the best conditions, online booking of your visit time slot is strongly recommended.

Following government announcements, access to the museum, the café and the bookshop requires the presentation of a green pass. More info

The section which is home to the “Italian Museum” was originally empty. Over the years, Nélie and Edouard André decided to install their Italian collections here. 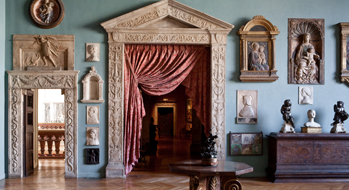 The section which is home to the “Italian Museum” was originally empty. Over the years, Nélie and Edouard André decided to install their Italian collections here. It was in some way their secret garden. While on the reception floor all their guests could admire their collections, visits to the Italian Museum were limited to a few friends or those art lovers who requested to be let in on the secret.

After his marriage, Edouard André had this room fitted out as a workshop for his wife, which was when the large picture window was created. But Nélie laid down her brushes for good and the room remained empty. Soon after she took her husband to Italy, and their joint love of Italian Renaissance art led them to visit this country at least once a year.
Over the years they accumulated their treasures, and it was only after Edouard’s death that Nélie installed this sculpture gallery. Its highly personal display is recreated here according to old descriptions. 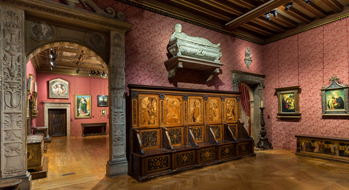 Nélie had often spoken of her desire to concentrate on Florence over the rest of Italy. So she devised a mausoleum in the form of a private chapel, bringing together all of her most precious possessions: presented on the one hand as a place of worship in which works inspired by religion were assembled (choir stalls, altarpiece and funerary monument), this room is also a gallery of paintings favouring the Florentine school.

Variations on a single theme – a series of Virgins and child from the same studio – display their resemblances and their distinctive features: the pupil, Sandro Botticelli created an early masterpiece, while his master, Le Pérugin, executed a masterly work, miraculously preserved. These panels are enough to make this room one of the most precious in the museum. It also contains another major work, Saint George and the dragon by Paolo Uccello. 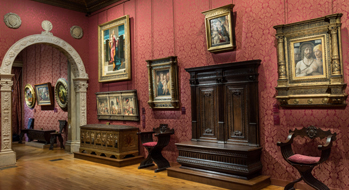 This final room in the Italian Museum is perhaps the one that owes the most to Edouard André’s personal taste. Fitted out during his lifetime, it brings together works from Venice and the schools of northern Italy. In fact, he had a preference for Venetian art. At the time, very few collectors were of the same mind; Florentine art was all the rage.

We can find works of art by Bellini, Mantegna, Crivelli, Schiavone and Vittore Carpaccio. The quadri riportati ceiling paintings, also Venetian, are in grisaille and combine religious and secular subjects.