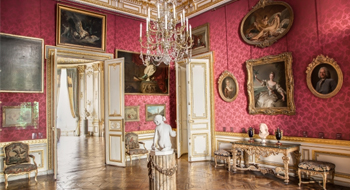 The Picture Gallery is an antechamber, a passage which leads on to the Grand Salon. Lit from the outside by three picture windows, it gradually leads visitors into the State Apartments. From one panel to another, visitors follow the display which, as Edouard André and his wife intended, alternates between decorative works, overdoors, mythological compositions, still lifes, landscapes and portraits.

The prestigious artists Boucher, Chardin, Canaletto and Nattier have all been brought together in the Picture Gallery. They greet the visitor as, over 100 years ago, they greeted the guests of Mr and Mrs André, making this first apartment an extraordinary gallery of paintings. Edouard André and Nélie Jacquemart loved 18th century paintings, which the upper classes were rediscovering after having long judged them to be excessively frivolous. 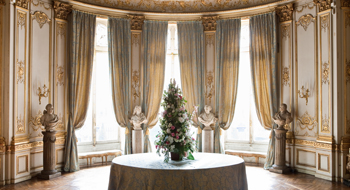 Having waited in the Picture Gallery, visitors entered the Grand Salon, a reception room par excellence. It was here that Edouard André welcomed his guests. For particularly large receptions, he would have the side partitions removed by means of hydraulic cylinders to turn the Picture Gallery, the Grand Salon and the adjacent Music Room into a single space. Here Edouard André and Nélie Jacquemart would receive around a thousand guests at sumptuous parties to which Parisian high society flocked during that period.

The Salon differs from the other rooms in its semi-circular design which evokes the 18th-century predilection for curves over straight lines. Its decoration combines elements from the 18th century with elements created by craftsmen when the mansion was built. Together, they create a harmonious whole, typical of the decorative art being introduced at the time in which furniture, antique objects and copies of style co-existed together: today this is known as eclecticism.

The space does not lend itself to paintings so there are none here, but there is a beautiful collection of marble busts from the 18th century, creating a gallery of sculptures. We can recognise the features of some famous people: politicians but also famous artists hewn by talented sculptors, Coysevox, Lemoyne, Houdon and Michel Ange Slodtz. 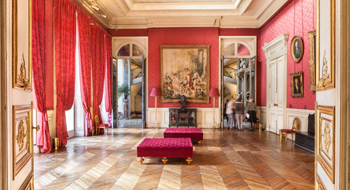 The Music Room is the other large reception room. This room is typical of the Second Empire, with its walls hung in red and its dark wood furniture. The paintings which decorate the room were often changed as the collection grew in size.  It takes us back to the France of the 18th century : Hubert Robert, Fragonard, Perronneau...

The painting on the ceiling bears the hallmarks of one of the most sought-after painter-decorators of the period, Pierre-Victor Galland. Here he has portrayed Apollo, protector of the arts, thereby ensuring that the god of arts and music presides over the destiny of this house. 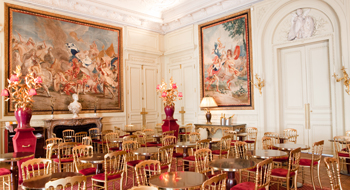 The size of this room and the quality of its décor bear witness to its importance in the everyday life of the mansion. Around the edges of the room, a series of Louis XV console tables in gilt and sculpted wood serve as sideboards, while the bust of Mrs André has pride of place on the mantelpiece. Above the bust, five tapestries of Achilles woven in Brussels in the 18th century tell the adventures of the hero of the Trojan War. The freshness of their colours is remarkable.

The most surprising element is the fresco on the ceiling: the work of Giambattista Tiepolo, it comes from the Villa Contarini in Mira, as does the fresco on the staircase. Despite its subject, The announcement of the arrival of Henri III, the trompe l’oeil effects, the people leaning on their elbows and the monkey with its tail hanging over the arch, give it a comic air. The painter even appears to have put himself in there, leaning over the balustrade as though greeting the visitor.