The Winter Garden is a magnificent testifies of the theatrical taste of Édouard André and the genius of his architect Henri Parent.

Behind the Music Room is the Winter Garden, characteristic of the art of entertaining which developed under the reign of Napoleon III. Imported from Great Britain, this innovation was very successful. It consisted of arranging pot plants, usually exotic ones, under the cover of a glass roof. This green space gave guests somewhere to rest for a moment in a more refreshing environment than the oppressive neighbouring rooms. The vestibule paved in marble with walls adorned with mirrors, leads to an astonishing double helix staircase. It is decorated with sculptures, turning it into a gallery of antiques. But the plants ranged around it remind us that this room was initially a winter garden, suffused by the light falling through the glass roof.

When the mansion was opened, this was the room that impressed contemporary visitors the most. In 1876 the magazine L’Illustration reported: “The marvel of this marvellous palace was indisputably the winter garden […] Our great ladies of fashion found refuge there to avoid the crowds. Only a king or a banker would surely dare to surround himself with such sumptuousness”. 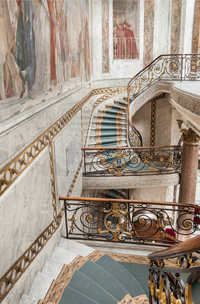 The architectural miracle of this house is its monumental staircase, curiously positioned right at the end of the apartments, where traditionally you would expect it to be in the centre of the building.

This staircase boasts an enchanting design which is surprisingly light despite the density of its materials: marble, stone, iron and bronze. It rises up to a rounded cornice which extends its curves. The mirrors reflect it on all the walls and complete the illusion.

To put the finishing touches to this grand staircase, the Jacquemart-Andrés installed this large fresco painted by Giambattista Tiepolo for the Contarini villa in the Veneto, where they found and bought it in 1893. It shows Henri III returning from Poland to take over the succession to the throne of France from his brother Charles IX. He travelled via Venice where he was received by the Doge Contarini.

A ceiling painted by the same artist depicting The announcement of the arrival of the king completed the décor of the Venetian villa. This ceiling was installed in the mansion’s Dining Room, now the Tea Room. Happy times when one could buy such a collection of Tiepolo’s work and add the two ceilings in the Study and the Boudoir all in the same year.