These two large-format compositions were the first of their kind in Chardin’s career. They were also some of Edouard André’s very first acquisitions.

The two decorative panels, placed on either side of the door, came from Laurent Laperlier’s collection, which was considered one of the most representative of Chardin’s work in the mid nineteenth century. The Sciences are symbolised by a world map, a telescope, a microscope, a square, geographical maps, and several books. The Arts are represented by a marble bust, a low-relief sculpture, a mallet, a palette and paintbrushes, and rolls of paper. In addition, the painter decided to complement these symbols with other objects that introduce an exotic atmosphere, evoking distant travels. 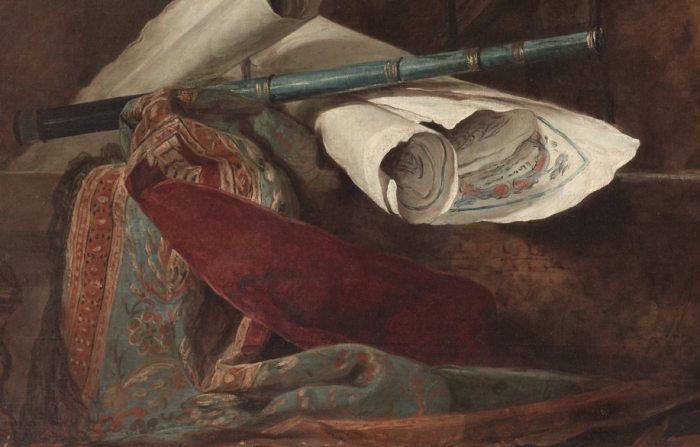 In the painting Attributes of the Sciences, an object can be seen that was part of the artist’s everyday life. In the inventory established in 1737 after the death of his first wife, mention is made of two large ‘Turkey carpets’ that covered the oak tables in Chardin’s studio.

These two paintings were commissioned by Comte Conrad Alexandre de Rothenbourg (1683/84–1735) for his library on Rue du Regard, in Paris. Intended to be hung high up, they were initially designed to be viewed ‘from below’.