Cabinet said to be that of the "Dichesse de Fontanges"

This piece of furniture is of royal origin. It was in fact commissioned by Louis XIV for one of his mistresses, Mademoiselle de Fontanges.

Pierre Gole can be considered the inventor of metallic marquetry, which can be seen on the cabinet’s panels. It was only after a study conducted in 1985 by Jean-Nérée Ronfort, a specialist on French cabinetmaking, that it became clear that it was a French piece of furniture of royal origin. The legs on which it rests have been crafted in the form of caryatids, which are not just independent figures but the protagonists in a mythological story, that of Hercules and Omphale. This cabinet was acquired by Edouard André in Italy, so it was quite naturally attributed to Italian cabinetmakers. The existence of an inscription, a stamp bearing the name of an Italian, confirmed this attribution. It took almost a century before the origin and creator of this piece of furniture were discovered during a study of the archives of the Mobilier Royal. The cabinet’s royal origin was confirmed. The cabinet’s creator was Pierre Gole, the inventor of the metallic marquetry that features on the cabinet’s panels. 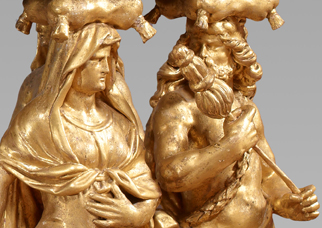 The decoration represents the love affair between Hercules and Omphale, symbolising that of the King. Bound by the bonds of love, Omphale has removed his mace, the symbol that he often holds in his hands, and has given him her distaff.

Of Dutch origin, Pierre Gole trained as a cabinetmaker in the Netherlands. He subsequently moved to Paris and joined the small and select group of craftsmen who worked for the King in 1651. Hence, this explains the originality of the cabinet, a piece of furniture whose function was rather antiquated but whose design and quality of execution are very much in the Versailles style.