The flight into Egypt

Attributed to Botticelli, a painter in whom Nélie André was particularly interested, this painting represents a famous biblical episode—the flight into Egypt.

It was long believed that the ‘simplistic’ nature of this work attested to the painter’s lack of skill and that, consequently, it could not be attributed to Botticelli. It was also thought that it had originally been painted on a wooden panel and transposed onto canvas, which suggested that it dated from after the painter’s death. All these theories have been invalidated and the painting is indeed attributed to Botticelli, who was, admittedly, aided by an assistant in the rendering of the figure of Saint Joseph. 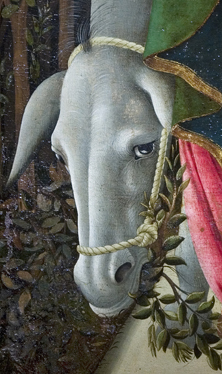 In the many representations of the flight into Egypt, as in those by Titian and Carpaccio, Mary is very often depicted seated on the donkey, with the infant on her knees. In this painting, Marie is standing with the child in her arms, and the donkey is grazing at her side.