Francesco Guardi is well known for his ‘views’ of Venice that so faithfully convey the city’s unique atmosphere. Early on, in 1864, Edouard André bought this small gouache and immediately identified it as a masterpiece.

The picture combines realism and fantasy, using a technique that was quite unusual for Guardi: gouache on paper, which gives the strokes a very particular lightness and transparency. The small square he painted, the ‘campo’ animated by figures, is not a specific place in Venice. One might search in vain for this portico with the hanging lantern, the church and its cupola, and the palace with the large stairway. In fact, unlike his master Canaletto, the artist was not trying to reproduce identifiable views of Venice, but rather to represent a familiar perception of the city. With its ever changing light and the meeting point between the sky and the lagoon represented in the same diaphanous and silvery light, the artist was adopting a more sensitive and romantic approach. 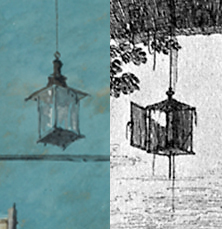 Certain variations are evident when compared with Canaletto’s famous etching, The Portico with the Lantern, held in Venice. For example, in Canaletto’s work, the lantern is open while in Guardi’s work it is closed and hanging from the arch.

In 1864 and 1865, Edouard André paid 18,500 francs for both Canalettos and only 290 francs for the Guardi. This enormous difference in prices cannot be justified by the use of paper as a support and the gouache technique.