Canaletto became famous because he mastered the documentary aspects of his works: every building in the square is recognisable in what could be described as a highly realistic view.

Antonio Canal, known as Canaletto, painted the most popular views of the Serenissima with extraordinary precision. Consequently, he represented the Piazza San Marco (St Mark’s Square) and the Rialto Bridge. Dominated by its remarkable Basilica and surrounded by Renaissance architectural masterpieces, the Piazza San Marco, as the hub of the political and religious life of the city of Venice, was the subject most frequently requested by collectors of Venetian views. In addition, the artist gave his painting a particular tone by using a deliberately restricted palette and skilfully rendering every possible nuance of light: each brushstroke and each touch of light has no significance in itself but rather contributes to the effect of the composition as a whole. 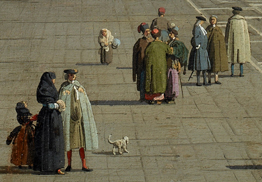 Although Canaletto’s remarkably precise and realistic urban landscapes are fascinating, he also mastered the representation of figures. On close examination of the works one can see many details and figures involved in various activities—a whole flurry of life beneath the impressive buildings.

The existence of many copies cast doubt over the authenticity of these pictures. Having acquired them on the basis that they were original works, Edouard André’s judgement has recently been vindicated.