This portrait was painted with incomparable skill: the delicacy of the face and lavish fabrics of the blue-grey dress with its metallic reflections, and the green sleeves. The artist succeeded in portraying this very distinguished and introspective woman.

As Marie-Antoinette’s official portraitist, Elisabeth Vigée-Lebrun immortalised the Queen’s features in all her splendour. Faithful to her convictions, the artist left France during the Revolution. In Naples, where she sojourned during her trip around Europe, she stayed with Count Skavronskaia, the Russian ambassador, who made her promise to paint the portrait of his wife before anyone else. She noted in her diary: ‘The Countess was gentle and pretty as an angel. In the daytime, she was constantly idle; she had no education, and her conversation was as empty as could be; despite all that, thanks to her ravishing face and angelic sweetness, she possessed invincible charm’. 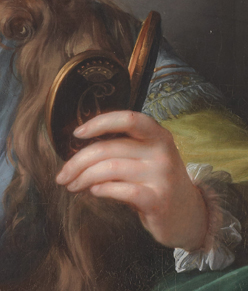 The sitter is dreamily contemplating a medallion—that she is holding in her left hand—, on which is depicted the portrait of her husband, Count Skavronskaia, the Russian ambassador.

The composition met with instant success and was reproduced many times. Two other portraits, with the same dimensions, have been identified in Russian collections.