The visit of Hippolyta, queen of the Amazons, to Theseus, king of Athens

It should be stressed that there are very works by Carpaccio in existence. The presence of this work in the Hôtel Jacquemart-André highlights the very exceptional nature of the Andrés’ collection.

In the Venetian section of the Italian museum, the panel painted by Vittore Carpaccio is distinguished by its secular iconography, as most of the collection is comprised of religious works. The straight elements on the left contrast with the rhythm of the winding line of figures on the right of the painting. Carpaccio, demonstrating the inventive imagination that characterises his works, transformed a mythological event into a courtly scene, in which can be seen details borrowed from fifteenth-century Venice, such as the representation of the four young people. 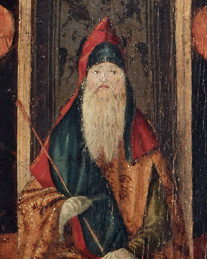 The scene is based a work by the writer Boccaccio, who had tackled this theme in his tale of Theseus. Carpaccio embellished certain elements, in particular by representing Theseus as an old, bearded man.

This painting was sold to the Andrés as a work by Vittore Carpaccio. However, the subject of the painting was only identified at a later date.